You are here: Home / Archives for 150th Birthday

The Benevolent and Protective Order of Elks, the national fraternal order first formed in postbellum America, is celebrating its 150th birthday on Feb. 16. But calling the Elks a mere “fraternal order” or a “social club” belies its importance, says Greg Verdun, the secretary of Pontiac Elks Lodge 1019 and vice president (and president-elect) of […] 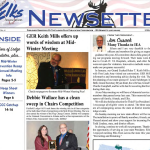 Download the Registration Form for the Convention in Atlanta, July 2-6, 2022.