The Benevolent and Protective Order of Elks, the national fraternal order first formed in postbellum America, is celebrating its 150th birthday on Feb. 16. But calling the Elks a mere “fraternal order” or a “social club” belies its importance, says Greg Verdun, the secretary of Pontiac Elks Lodge 1019 and vice president (and president-elect) of the Illinois Elks Association; rather, he thought more integral to the order’s identity was its history of beneficent undertakings over the last century and a half.

Verdun additionally noted that the Elks was the third-largest provider of college scholarships nationally, as well as being financially supportive of a number of veterans programs.

“We’re not just a country club,” he said. “While all that stuff is on the national level, we do have, just for example, our own scholarship fund in 1979 and we’ve given over $300,000 in the community since that time.”

Verdun noted that the Pontiac Elks Lodge was formally organized on March 1, 1906. The Lodge had its roots in the Vermilion Club, which was a young men’s social club that was charted and incorporated in Pontiac a decade and half earlier. Regarding his own history with the club, Verdun said he was invited to join in 1985. He said that his wife, Sue, encouraged him to join, but only if he was going to be actively involved in it. Within six months of joining, he became an officer, and he’s held some post or another ever since.

Verdun believed that a certified existence of more than 110 years speaks to the Elks’ staying power, particularly as membership has declined so severely in other organizations to the point of their closure. But the secretary of the local club notes it hasn’t been exactly easy for the Elks, either.

“Our membership was around 950 in 2008, and then, the economy tanked,” he said. “We lost members, we’re around 600 now. And for many years, we were a mens-only club, which changed about 20 years ago — there was one initiation a few years ago, when we had 19 people initiated: 14 of them were women.

Verdun added that there was perhaps a stronger hereditary relationship of members, meaning that children of Elks members were often sought for recruitment. But something he felt was just as important, albeit less thought of, was the impact the organization had on the communities they were a part of. 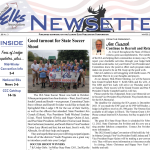 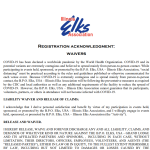 Waiver form for attendance at the IEA January meeting.